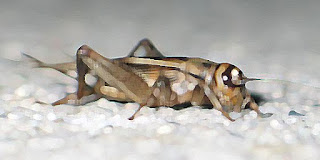 So...I've gotten a bit attached to a cricket in my house.
It's the singing thing.
We both do it, and his chirping from sunset until early morning sounds like a lullaby to me.
Maybe it's because it reminds me of growing up on the farm and the intense connection that I felt as a child to nature.
It's different in the city--much more subtle...
But Nature makes her way through the concrete and human boundaries:
from the ants who dare to venture through my kitchen,
to the grasshopper on my rose bush,
the hummingbirds and butterflies outside my picture window,
the bats flying overhead in the Fall during my evening dog-walks,
and the coyote that taunts the neighborhood dogs...
To the cricket that chirps in my bathroom at night.
There's something calming about his song... especially amidst the incessant sirens and occasional domestic disputes of neighbors nearby.
I'm not sure if it was the creative side of my brain, or the crazy side (besides, I think the two are connected)--but my brain decided to name this cricket Vern.
He reminded me of one of my favorite childhood books The Mouse and the Motorcycle by Beverly Cleary--about a mouse named Ralph who had many adventures with human encounters living in a run-down inn.
All this came about the morning that Vern decided to crawl on my toe while I was taking a shower. It was one of those moments for me, where I was startled to feel something on my foot, and then wondered if it might be the gecko that occasionally sneaks into my shower.
But sure enough, I looked down, and it was Vern.
And he was NOT in good shape.
I hoisted him onto the tile outside my shower. He wasn't moving. By the time I got out, he was on his back, and I thought that he had bit cricket dust.
I flipped him over, but I admit--I didn't have much hope for the poor little guy.
As I made coffee afterwards, I hummed away in honor of Vern...thinking about how I would miss his evening chirping and how his exodus into the shower must have been very tragic.
An hour later, I went back into the bathroom. Vern's legs were responding to touch, and his antennas were no longer waterlogged and stuck to the tile.
I was amazed...a cricket resurrection!
The last couple nights as he's chirping from different corners of my house, I just smile knowing that Life has an uncanny way of transcending my expectations.
AND...I've started to make music with him.
He's got a great sense of rhythm and sings in the key of D.