Six Feet of Clay: Reflections from a Cemetery in Missouri 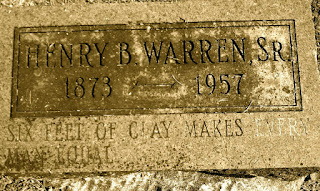 "Six feet of clay makes every man equal,"
the epitaph reads.
I stop in my tracks.
That's quite a final statement to leave to the living.
My mind spins. What would inspire this?
A lifetime of events epitomizing human "inequality"? A country freshly emancipated from slavery with Jim Crow laws "regulating" racial discrimination; a Women's Suffrage Movement; World War I with its genocide and ethnic cleansing; the Great Depression and its economic fall-out drastically devastating minority groups; World War II and the annihilation of millions of Jews and those deemed "unfit for society" by a dominating class; Rosa Parks' big stand; and Martin Luther King Jr.'s early work in the Civil Rights Movement? 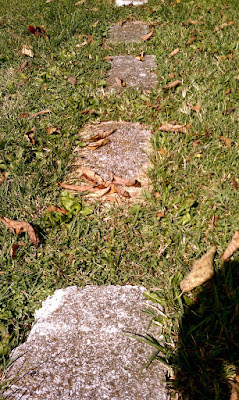 Yes, Mr. Warren's time on Earth had plenty of fodder for such a statement.
It's a beautiful Fall day in Springfield, Missouri. I wander through Hazelwood Cemetery to the once segregated south-side where "people of color" were buried. I find graves marked by cinder-block-like stones with no epitaphs, some with faint letters scratched into them.
There's a timeless quality to the words "six feet of clay makes every man equal".
Fifty-three years later, I am bombarded by headlines of hate-crimes, bullying, suicide, war, genocides and more.
It all seems ridiculous and insane. Because when all is said and done and lives are gone, what's left? 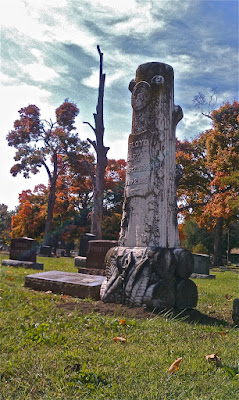 A gravestone maybe.
Often a family.
Always a lesson.
And the web of energy woven by a life-thread.
Fifty-three years later, Mr. Warren's life-thread weaves from a stone inscription
into my thoughts
into this blog
and now into you.
And Hazelwood Cemetery is no longer segregated.
I find peace here. In the lessons of transformation. In being part of the transformation.
And in the poetry of epitaphs and gravestone art...Symbols of human love and connection. Threads of energy that emanate timelessly.
"Energy can neither be created nor destroyed, it can only change forms." ~First Law of Thermodynamics
Every step is a choice in how I transform my energy.