The Gift of Surrender "They knew"
Image courtesy of De Leon Moving Pictures.
Amber pictured with Deuce at Equine Voices Rescue & Sanctuary.
"To the ego mind, surrender means giving up.
To the spiritual mind, surrender means giving in and receiving."
~ Marianne Williamson, from her book The Law of Divine Compensation
On Sunday, June 30th, 2013, I received a gift.
I had done everything I could to avoid doing the Raise Me Up video shoot that day. We had the hottest month of June on record in southern Arizona. And that specific weekend was projected to be the hottest weekend of the entire summer. I had no idea how I was going to pull off a weekend of sleep deprivation, four back-to-back gigs, 50+ miles of travel in between them, 100 more miles for the Sunday morning gig, a visit to my stylist and then another 50 mile trek to Equine Voices Rescue & Sanctuary for a Sunday afternoon video shoot.
It's a good thing my woe-is-me mind is not in charge.
I had called director Marcus De Leon several nights before, more or less begging him to reschedule the shoot until September. I had it all figured out...it'd be cooler, less stressful and the monsoons would add a beautiful backdrop. When he explained to me that he had an entire cast and crew with heavy equipment lined up and that rescheduling was not an option, I realized that my only option left was...
Well...to surrender...
And pray that I would maintain grace and music-video-composure amidst the sweltering heat of the desert.
I arrived on scene that afternoon relieved and grateful. Everything had gone smoothly, I was still awake, no travel issues, weekend gigs / hair / make-up schedule successfully accomplished, and I had remembered my boots.
Soon after arrival, clouds to the west began to build and grow dark and looming among the Santa Rita Mountains.
I kept thinking, "This is strange...monsoon season hasn't started yet, and only a 'hottest weekend of the summer' was in the forecast."
Then the wind picked up, the temperature dropped, and a very recognizable scent of moist creosote wafted our way. Sheets of rain engulfed the mountains. Lightening came, thunder followed.
Everyone commented about how magnificent our unexpected "free" special effects were...
And that we better expedite the shoot.
So we grabbed one camera and rushed over to the open space where the horses roam in the sanctuary.
As I began to sing, two horses gathered around me. They were two of the original foals that were rescued when the sanctuary was started. They had been offspring of mares who were used in the Premarin industry and were headed to slaughter when the sanctuary intervened to rescue them.
They stared at me intently. I felt like they saw into my soul and that we had some kind of agreement...to be right here, right now, making this song and video together...to share this deep sense of compassion, peace and healing with the world.
The connection didn't end.
As I let the last chord and word ring out, one of the horses put his head towards mine. We both leaned in and rested our foreheads upon each other...for what appeared as only a moment on the outside, but from within, it felt like eternity.
I could hear Marcus repeating, "Don't cut, don't cut, keep it rolling."
When we finally did "cut," the staff and crew said, "It's like they knew..." and almost as if in agreement, a big gust of wind blew through casting dust and rain upon us.
The encore of the season's first monsoon had arrived - despite the forecast, despite my worry. And in its grandiose production, all that was required of me was to show up and play my role.
Indeed, these four-legged sentient beings, my brothers, with whom I walk upon the earth, did know. 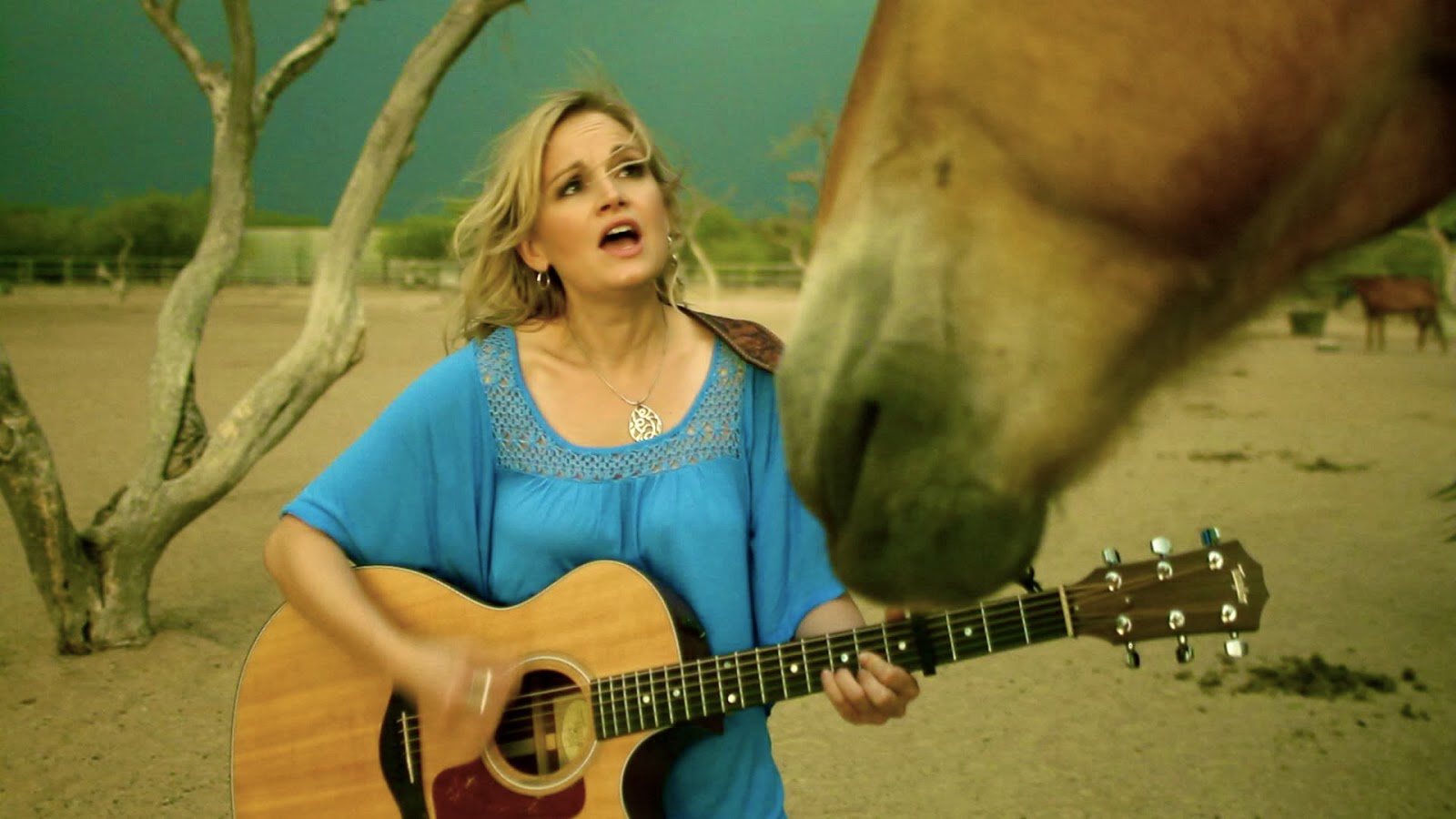 "Sharing soul"
Image courtesy of De Leon Moving Pictures
taken at Equine Voices Rescue & Sanctuary.
That day, they taught me the gift of surrender. All I have to do is be present, and a power much greater than me takes care of the details.
Oh, and one last thing...
I had never sung to horses before, but I highly recommend it if you ever get the opportunity.